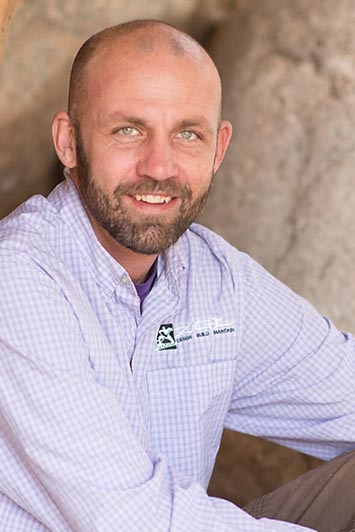 Seth is a Colorado native that was born and raised in Pueblo. Seth attended Northeastern Junior College, where he first met Zak, and studied communications at Colorado State University. He then traveled around the US helping to open and manage several restaurants. After spending time in Vermont and Florida, Seth found his way back home to Colorado. While he enjoyed his 12 years within the Food and Beverage Industry, he saw an opportunity for a career change while catching up with his old college roommate Zak in 2012. Seth has been at ZGL ever since. He has embraced the challenge of learning the ins and outs of the Green Industry. The management and business skills he’s acquired throughout the years, his college studies, along with what he learned growing up in an agricultural setting have greatly benefited him in his role as a leader here at ZGL. Seth holds a Colorado Gardener Certificate along with a Doctor of Divinity Degree as an Ordained Minister.

In his time away from work, Seth enjoys spending time with his longtime girlfriend Janelle. Together they like building furniture for their home, collecting growlers from breweries they visit, and finding and fixing up custom bicycles for them, their families and friends to ride on what Seth considers his favorite holiday which is Tour de Fat. While they have no children, they do have two dogs, Flint and Morgan, and one cat, Wick, whom they love greatly. If Seth is not with Janelle or his pets, chances are great that you will find him chasing a little white ball around one of NOCO’s local golf courses with his buddies.